Salesforce campaigns synced with events is an extremely powerful way to link together your marketing initiatives and the registered attendees that are generated as a result. When paired up with a powerful Email marketing tool, you can take automation to the next level.

The general principle behind combining Email Marketing tools with Salesforce/Campaigns is that you can build lists, segment data, and send out email campaigns, directly from within Salesforce. Some of this functionality is evident with tools like Pardot, Campaign Monitor, and Mailchimp that all have their own Salesforce connectors.

There are fields and buttons to add to Campaign and Campaign Member Page Layouts.

Invite Attendees from the Campaign

Relate an Event to your Campaign

To start, we have to relate an event to the Campaign. This field must be defined to create and invite Attendees for an Event from Campaign Members. 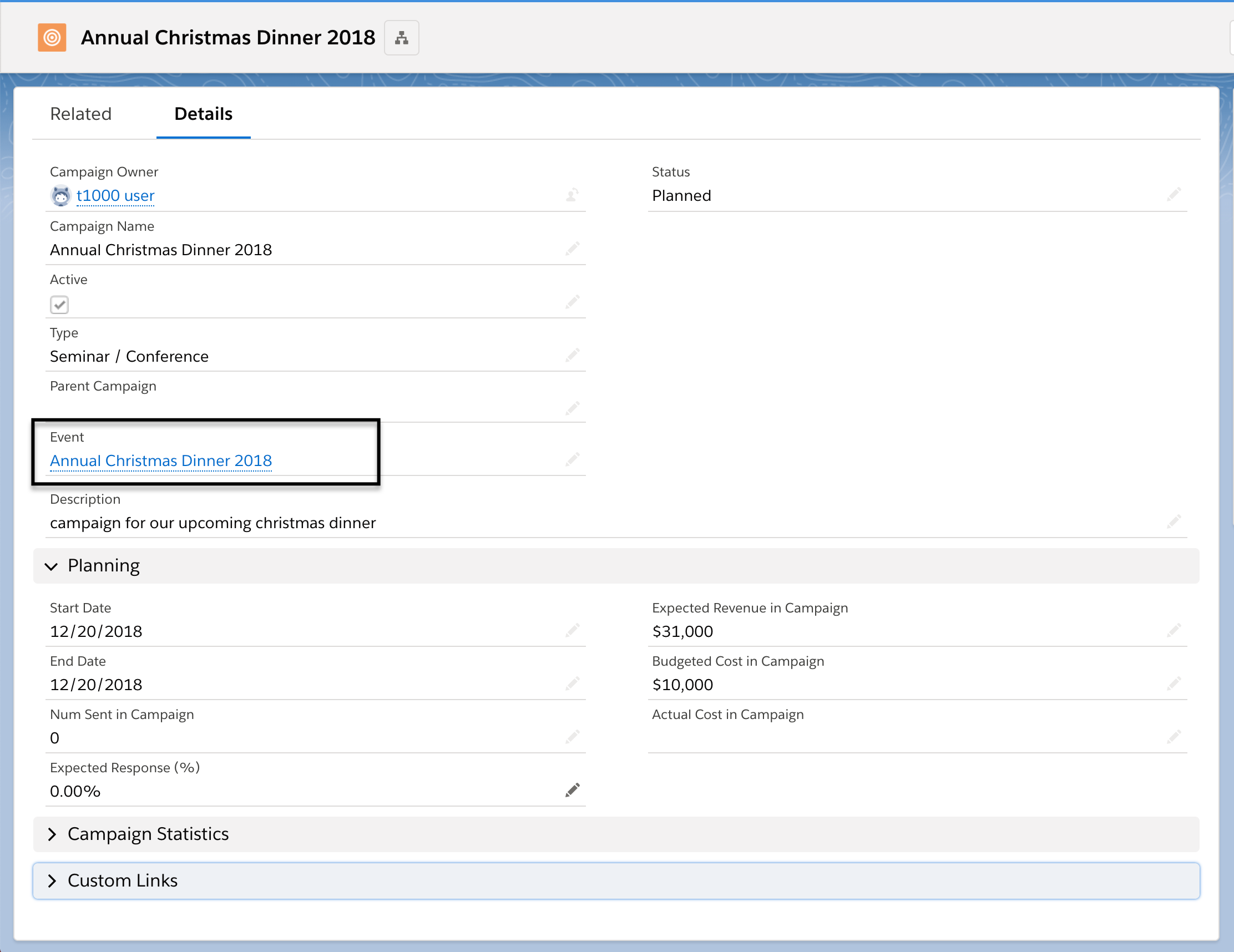 We have added three new fields to the Campaign object that allow you to configure the Attendee Registration Status.

A new field has been added called Event Auto Sync.

If you mass add more than 5 campaign members when auto-sync is turned on, a scheduled job is created to add the members as attendees in 30 minutes.

If you need members created as attendees quicker than 30 minutes, turn off the sync, mass add your members, then click the "Add Attendees" button.

Uploading Campaign Members
When a bulk number of campaign members are uploaded, this process will take some time as it is then set as a scheduled job. The scheduled job runs an hour later to convert the newly inserted members as attendees.

Existing Campaign Members
This process would fire automatically only when a new member is inserted. For existing members, you would still need to click the 'Add Attendee' button to create them as Attendees under the given Event.

Send Invite to All Attendees

On the Event add the button "Send Invite". Clicking this button will update the Attendee Registration Status = Invited

If your Salesforce Workflow rule of "Send Blackthorn | Event invite email" is set to Active, this will trigger the sending of the invite to your Attendee.

If you are using the workflow we provided, your campaign members will immediately receive the invite email when you click the "Invite Attendees" button.

Please make sure to have an associated Campaign set up before an Attendee registers or else attendee will not sync to Campaign. If adding Campaign to an Event after Attendees have already registered, you can use an Attendees with Contact Report to mass add these Attendees to new Campaign using the Add to Campaign button which will sync Contacts over to the Campaign.

You can define the Status that needs to be set when the Attendee registers/declines/attends the Event.

1. Campaign Member Registered Status
Whenever an Attendee registers for the Event, the Status on the associated Campaign Member is updated to the defined value, and if NULL Status is set to Responded

2. Campaign Member Declined Status
Whenever an Attendee declines for the Event, the Status on the associated Campaign Member is updated to the defined value, and if NULL Status is set to Responded

3. Campaign Member Attended Status (v2.17 onwards)
Whenever an Attendee attends for the Event, the Status on the associated Campaign Member is updated to the defined value, and if NULL Status is set to Responded

Updated over 1 year ago